2018 marks the 70th anniversary of the birth of the State of Israel and the creation of the Universal Declaration of Human Rights. Yet the surprising connections between Zionism and the origins of international human rights are completely unknown today. Rooted Cosmopolitans: Jews and Human Rights in the Twentieth Century offers the first major account of this story, told through the lives of five remarkable Jewish activists who built both the State of Israel and the architecture of modern human rights. The result is a multiple award-winning book that challenges assumptions about the Holocaust origins of modern human rights and speaks directly to the urgent political debates of the present.

“This year marks two 70th anniversaries: Israel’s birth and the signing of the Universal Declaration of Human Rights. Loeffler reminds us how entwined the two events were — both for the role Jews played in codifying human rights and for how Zionism was buoyed by these new international values.”
New York Times

“This superb book is a homage to visionary cosmopolitans dedicated to the creation of human rights in a world too often lacking in humanity.”
Washington Post

“‘Human rights’ has [become]… a vague term to be dismissed by realists and swooned over by idealists. James Loeffler’s book ‘Rooted Cosmopolitans’ is a bracing and nuanced attempt to correct this—to restore a grave, complex, powerful idea by tracing it to the people, most of them Jews, who argued it into existence.”
Wall Street Journal

“[This] book belongs on the shelf of anyone interested in human rights or modern Jewish political thought and history. He marshals remarkable archival research, literary grace, and philosophical insight to recover a forgotten chapter of history (several, actually) and make us think more deeply about political ethics, both Jewish and universal.”
Jewish Review of Books

“Building on a trove of archival material, this extraordinary book challenges orthodoxies both on the right and on the left.  It has the potential to transform popular understandings of this critical period of history and is a must-read for anyone involved in Jewish communal life or human rights work.”
Rabbi Jill Jacobs, Executive Director, T’ruah: The Rabbinic Call for Human Rights

THE LAWYER. The story begins in war-torn Poland at the end of World War I, where we meet a young Zionist lawyer named Hersch Zvi Lauterpacht, who would go on to become the founding father of international human rights law and drafter of early versions of both the Israeli Declaration of Independence and the Universal Declaration of Human Rights — as well as the man who invented the concept of “crimes against humanity” for the Nuremberg Trials.

THE RABBI. Following Lauterpacht to 1920s London, we enter the world of British Zionism, where we encounter his friend, the colorful Rabbi Maurice Perlzweig, a Cambridge debate champion, pioneering Anglo-Zionist, and liberal Jewish religious leader. Perlzweig co-founded the World Jewish Congress, the first Jewish international human rights NGO, and fought for Jewish rights both in Eastern Europe and British Palestine at the League of Nations and later the United Nations. ​

THE ACTIVIST. Through Perlzweig, we meet his student, a young Jewish activist named Peter Benenson, who dropped out of Eton to rescue German Jewish children during the Holocaust. Benenson went on to pursue a career in British politics before renouncing his faith in Judaism — and in international law. Converting to Catholicism, he launched a radically new kind of human rights organization, Amnesty International.​

THE DIPLOMAT. While Benenson reimagined modern human rights as a universal religion beyond Zionism, Jewish legal diplomat Jacob Robinson developed the post-1948 Israeli human rights vision. Meeting him first in interwar Lithuania, we follow him across the postwar world, as he fought for Jewish statehood as part of the Israeli UN delegation, helped design the Nuremberg and Eichmann Trials, and led the creation of the International Refugee Convention.​

THE PHILANTHROPIST. At the UN, Robinson clashed repeatedly with Arab and Soviet diplomats, but his greatest rivalry took place with a fellow Jewish rights-defender, Jacob Blaustein. American Jewish oil tycoon, philanthropist, and longtime leader of the American Jewish Committee, Blaustein spent four decades as chief booster (and private funder) of human rights in U.S. foreign policy, while quietly attempting to broker an end to the Arab-Israeli conflict through secret personal diplomacy.​

The lawyer. The rabbi. The activist. The diplomat. The philanthropist. These five lives intersect even as they criss-cross the Jewish twentieth century, culminating in the fateful decade of the 1970s, when human rights organizations and Israel entered into a stormy cycle of conflict in which they remain locked today. Rooted Cosmopolitans concludes with a new interpretation of the deeper reasons for that conflict, and a discussion of how both human rights activists and Jewish leaders, particularly in the American Jewish community, can move beyond that impasse.​

Based on eight years of research in seven languages across three continents, Rooted Cosmopolitans challenges contemporary assumptions about the historical ties and tensions between Zionism and human rights that plague discussions of the Israeli-Palestinian conflict on both the Right and the Left. These unknown stories offer inspiration for those seeking new ways of thinking about the future of both human rights and Jewish politics — and a reminder about law’s potential and its limits in the fight against global antisemitism. 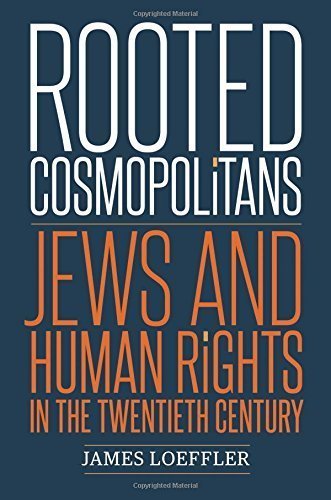